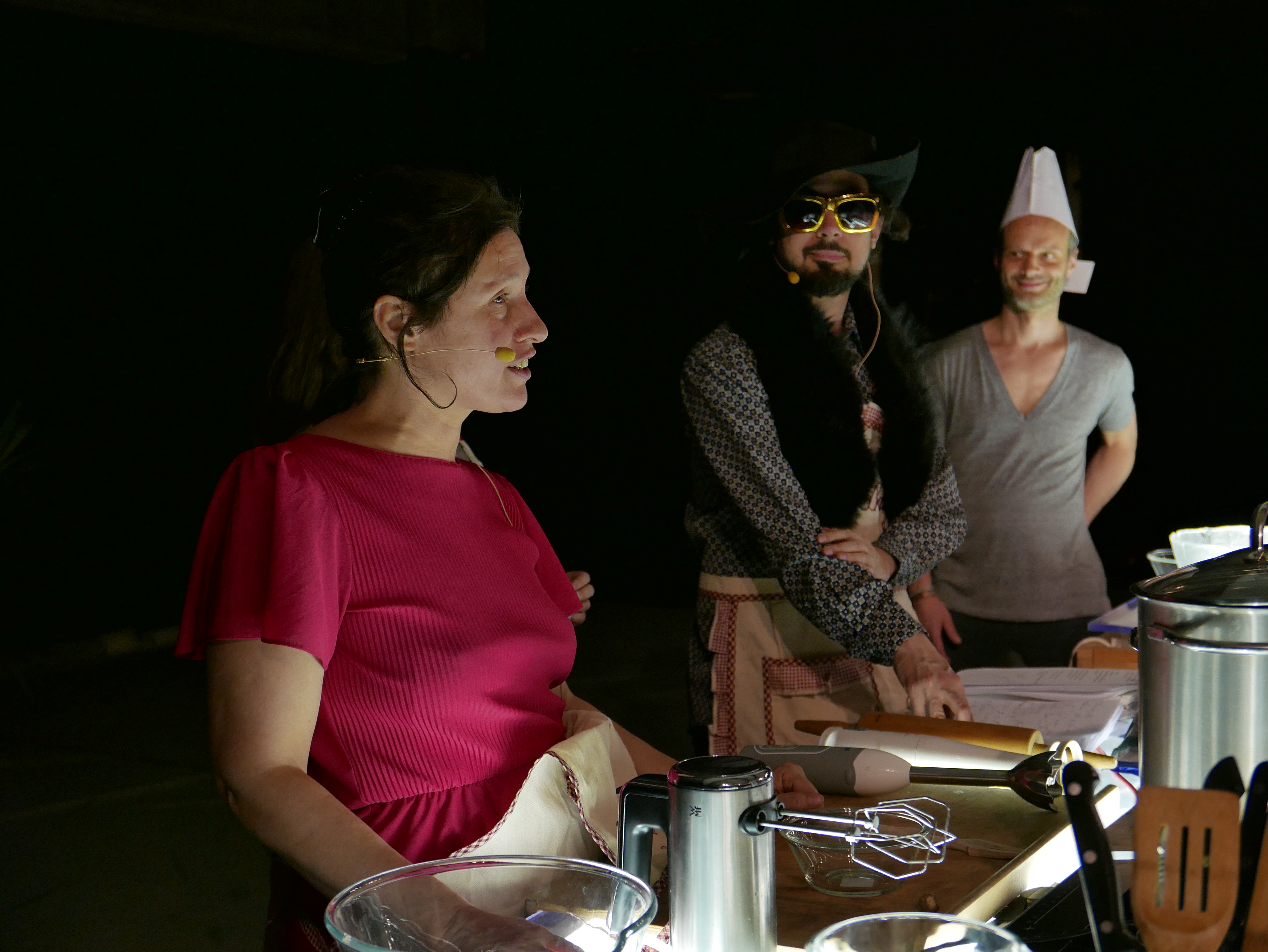 Constanza Macras was born in Buenos Aires, Argentina, where she studied dance and fashion design, at the Buenos Aires University (UBA). She continued her dance studies in Amsterdam and New York (Merce Cunningham Studios).

From 2001 to 2002, Macras developed and presented the trilogy MIR: A Love Story.

In 2003, she founded her company DORKYPARK, it is an interdisciplinary ensemble that works with dance, text, live music and film .

The company has been touring extensively across the world, being invited to festivals such as the Festival d’Avignon in France,  the Wiener Festwochen in Austria, the Seoul Performing Arts Festival (SPAF) in Korea; the Buenos Aires International Festival (FIBA) in Argentina, Attakalari – India Biennial in India, Dance Umbrella Johannesburg among many others.
In Germany the company collaborates with HELLERAU – European Center for the Arts in Dresden and with Berlin based venues such as the Schaubühne am Lehniner Platz, Maxim Gorki Theatre and in the past with HAU  -Hebbel am Ufer. Apart of these partners the company also works in Hamburg with Thalia Theater and Kampnagel, beside having toured in many state theaters like Schauspiel Hannover, Theatre Freiburg and Schauspiel Köln.

In 2002, she also curated the project ‘PORNOsotros’, where she performed together with Lisi Estaras (Ballets C. de la B.) under the direction of different directors four short pieces dealing with the subject of pornography at Schaubühne am Lehniner Platz, Berlin.

In 2010 Constanza Macras was awarded the national German theater-prize DER FAUST for best choreography for the piece MEGALOPOLIS.

Next to her productions with her company, Constanza Macras has also created “Bosque de Espejos” (2016) for Teatro Colón’s Permanent Ballet Company in Buenos Aires; “Soft Cell” (2015) commissioned by and for the Göteborg Opera Dance Company; Paraíso sem Consolação (2008) a commission work of the Goethe Institut São Paulo with dancers from the company and a Brazilian cast. Premiered in São Paulo; Ein Sommernachtsraum (2006) together with Thomas Ostermeier, the Schaubühne ensemble and dancers from DorkyPark, Premiered at the Hellenic Festival; Pegarle a la Bolsa (2004) a commission from the Goethe-Institut Cordoba (Argentina) and Happiness (2003) for the Saarländisches Staatstheater Ballet.

Adham Hafez is a choreographer, composer and performer from Egypt. He studied contemporary dance at the Cairo Opera House before he moved to Amsterdam for his Master in Choreography, at the Amsterdam Theatre School. With a Master degree in political science from SciencePo (Paris), Hafez his work tilts towards studying what political art is at times of catastrophic change, having studied with Bruno Latour the impact of the human on nature; physically, artistically and politically. Awarded for his work as a choreographer, composer and cultural entrepreneur, Hafez is currently a PhD candidate at New York University, completing a 15 years research on Arab performance history. In 2004 he founded his own company: Adham Hafez Company has produced and toured performances in the Arab World, Europe and the US. His company’s latest productions were presented at MoMA PS1 (New York), Hebbel Am Ufer (Berlin), and ImpulsTanz (Vienna). Adham Hafez publishes in Arabic and English on Arab art history and performance theory.

Hafez is the founder and program director of HaRaKa, the first movement and performance research project in Egypt. He is also the artistic director for the TransDance festival series and the founder of “Cairography”, the first publication in Egypt dedicated to critical writing on choreography and performance.

His futuristic performance 2065 BC (2015) was one of the highlights of the Berlin theatre festival Return to Sender at the HAU. 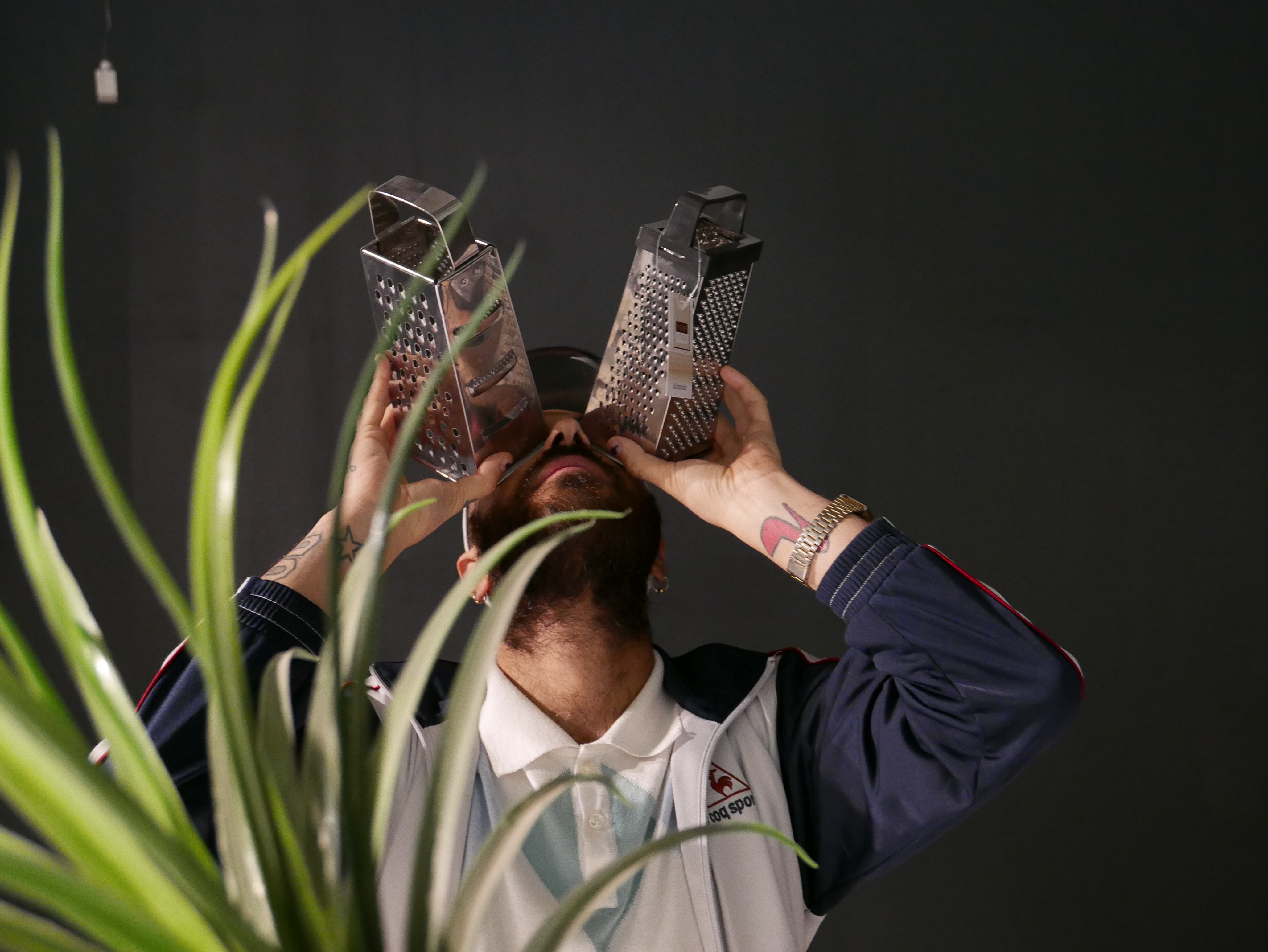 For their performance Electrodomestics, Constanza Macras and Adham Hafez founded a collective for 'domestic affairs'. In a lively and inspiring

For their performance Electrodomestics, Constanza Macras and Adham Hafez founded a collective for ‘domestic affairs’. In a lively and inspiring mixture of a cooking show, a concert, a performance, an expert discussion and dance, the group investigates the concepts of cultural background and identity. Based on the performers’ circles of family and friends, the group uses their social surroundings to explore phenomena like collectivity and nationality. The audience cooks, eats and joins in the discussion and in this way are pushed to their own boundaries and stigmata, but also unexpected openness. The boundaries between the performers and the audience are blurred and together they open up a space for exchange, togetherness and spontaneous, creative eruptions.

Constanza Macras, born in 1970, is world renowned dancer, choreographer and performer. Together with her company, DorkyPark, she has already taken part in a large number of festivals. For her piece Megalopolis, created in 2009, the company was awarded the FAUST theatre prize in the category of choreography. Adham Hafez is a choreographer and performer from Egypt. His futuristic performance 2065 BC (2015) was one of the highlights of the Berlin theatre festival Return to Sender at the HAU.