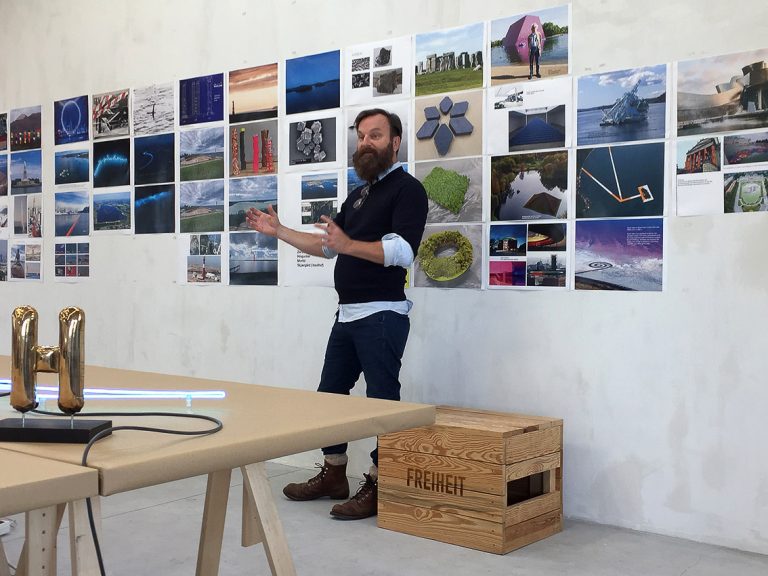 Lars Ø. Ramberg is a Norwegian artist, who has lived in Berlin since 1998. His work mainly consists of installations, photo manipulations and performances and tries to give expression to his idea of freedom and social life. His field of activity is primarily the public space with the starting point in the social and historical material found. Ramberg became known in Germany in 2005 due to a broader media coverage: On January 26, 2005, the artist installed neon letters more than six meters high on the roof of the Palast der Republik in Berlin, which formed the word ZWEIFEL. The lettering was part of the Palace of Doubt project. With this Ramberg wanted to promote the discussions about the palace and connect it with the discourse about lost utopias, the search for new perspectives and identities. In Germany, Ramberg has participated in numerous exhibitions, especially group exhibitions, including to Norske Profiler (Museum Folkwang Essen, Kunsthalle Rostock, 1997), Berlin North (Hamburger Bahnhof, Berlin, 2004), Urban Realities: Focus Istanbul (Martin-Gropius-Bau, 2005). Individual actions were mainly to be seen in the Scandinavian region, but also in Germany. Ramberg was also active internationally in France, the Netherlands and Mexico. In October 2006 Ramberg took part in the São Paulo Biennale in Brazil, and in 2007 he was represented in the Nordic Pavilion at the Venice Biennale.